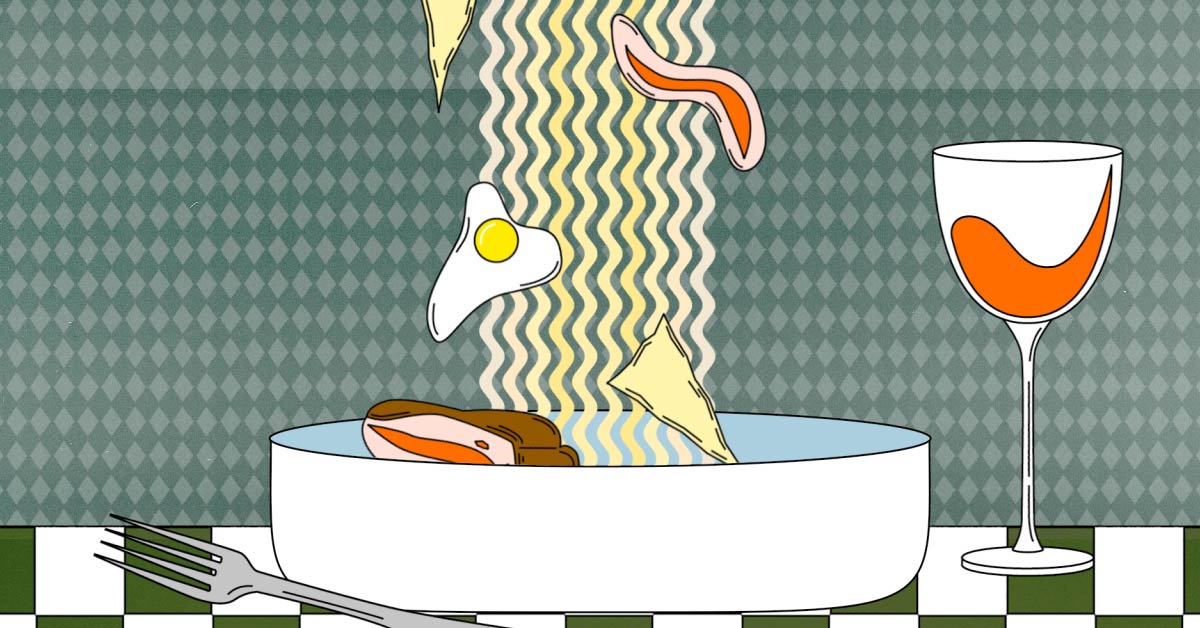 Is policing what defines authentic carbonara really the hill you want to die on?

When the New York Times  recently published a recipe for carbonara made with bacon (not guanciale!) and fresh chopped tomatoes, the carbonara police were outraged. In response, Rome-based food writer Elizabeth Minchilli posted the standard Roman recipe on Facebook and was even quoted on RAI, the Italian national TV station, discussing what an abomination it was. The Coldiretti (National Confederation of Direct Growers), an Italian farmers’ union, described “Smoky Tomato Carbonara” as the “tip of the iceberg” in the “falsification” of traditional Italian dishes.

I confess that I was pretty amused by the commotion, but it made me wonder, why do we even care about these matters? Carbonara is a pasta dish that’s familiar nearly all over the world at this point (a version even appeared at Spain’s legendary El Bulli in 1999), but it’s hardly so ancient and venerable that a tweak or two, or even three, can’t improve it. I would know—I’ve served the dish in multiple restaurants I’ve worked in and have written about it in mainstream food publications, as well as in both my cookbooks, Olives and Oranges and The Four Seasons of Pasta.

Globally, Italian food is one of the most beloved cuisines, exported by Italian immigrants to the Americas and Australia in the early 1900s, discovered on its home ground by modern tourists and food writers, and reinterpreted by Japanese stagiaires and countless Americans. We outsiders working in food yearn to define it. We think we can break la cucina Italiana down to a simple set of rules that the collective “we” can understand and incorporate. But if you take the time to really study Italian food—cooking it and eating it, not just spending a couple weeks in Rome or reading a few cookbooks—you quickly discover that it’s almost impossible to categorize Italian cuisine, because there simply is no agreed-upon canon—and carbonara falls squarely in the crosshairs of debate. Italians are outraged when rules are broken, then turn around and break them themselves.

In a culture as old as Italy’s, you can read a fascinating history in the dishes themselves—for instance, seeing the antiquity of Italian Jewish culture in the olive oil fried dishes of Rome, including, of course, the double-fried artichokes that surely go back to the friggiatori that archeologists tell us dotted the city in ancient times. It’s intriguing to posit how the old Roman condiment garum (fermented fish sauce) lives on in the form of pungent colatura from Cetara. And I wonder what Italian food would look like without the Columbian exchange, which brought such iconic foods as tomatoes, peppers, and beans to Europe from Mesoamerica.

Old as it is, Rome’s cuisine is constantly evolving, too. Over the years I lived in Italy—about 15 years off and on—I watched as the consumption of raw fish evolved from something done only in Puglia to a common approach to seafood up and down the boot. My parents remember that it was only possible in the ’70s to order a bistecca alla fiorentina cooked medium well, something no one would do today. The more I study Italian food and the more I learn, the more I understand how malleable it is.

For Italians, rules are meant to be broken, consciously or unconsciously, and the food changes all the time, even things you might think have been defined for centuries. Pizza margherita, for example, was only defined in 1861. According to Pellegrino Artusi, in his cookbook Science in the Kitchen and the Art of Eating Well, published in 1891, eggplant and fennel—both vegetables that define Italian cooking today—were considered “Jewish food” and relegated to Italian Jewish recipes.

In the Maremma region of Tuscany, acquacotta is a brothy soup ladled over grilled bread with a poached egg in it; in the Casentino, the dish is served with stacked stale bread, layered with slow-cooked onions, and moistened with broth, more bread pudding than soup. All over the world, people eat what’s called Italian food, some of which is unrecognizable to Italians—spaghetti and meatballs, for instance, a dish that appeared so non-Italian to me when I first encountered it in an Italian American restaurant in the North End of Boston that I was repulsed. The British have made “spag bol” their own near-national dish, even if the idea of pairing anything other than fresh egg tagliatelle or fettucine with Bolognese ragù is sniffed at by most Italians.

Bolognese, of course, is the long-cooked ground meat sauce that even the Bolognese themselves cannot quite define: Does it require milk in the cooking? Does one add tomato or not? Each house makes it differently, although there are a few agreed-upon rules, and even a definitive recipe archived at the Accademia Italiana della Cucina, an organization dedicated to categorizing regional Italian foods.

Lost in translation is the fact that Bolognese is but one of hundreds of meat ragùs available all over Italy, from chunky Neapolitan Genovese to aggressively spicy goat and lamb ragùs in Calabria. Ragù Bolognese is a ragù, it’s true, but not all ragùs are Bolognese. While there might be some wiggle room in the recipe for Bolognese, there is no such thing as broccoli Bolognese (apologies to the former editor of Bon Appétit), although it could be called broccoli ragù; there are vegetable ragùs mostly dating to a time in Italy when meat was a rare and precious thing. It’s understandable, the confusion—Italy is confusing! That’s part of its charm.

For Italians, rules are meant to be broken, consciously or unconsciously, and the food changes all the time, even things you might think have been defined for centuries.

Carbonara is another dish that has been so embraced globally that it is constantly being tweaked—and reinvented whole cloth. It’s a dish every Roman knows, the ultimate comfort food made quickly and easily from ingredients most Italians have in their pantry, and it’s a dish everyone in Rome is quick to define: no cream, no onions (but did you know that the “official” recipe, recorded in the Accademia Italiana della Cucina, has garlic to flavor the oil?), and certainly no vegetables, even though I’ve watched many Italians stir some zucchini or roasted peppers into the sauce—to my mind, a welcome addition to its cloying richness. Should carbonara be gray with black pepper or simply have a twist or two from the pepper grinder? And so it goes.

Carbonara is the dish I loved when I first lived in Rome, eating it in restaurants and cafés while my parents spent hours at the table with their friends, enjoying a proper long Italian meal while us kids quickly wolfed down a bowl of pasta and raced off to amuse ourselves by playing in the piazza. When I moved to the United States for college, it was a dish I taught myself to make using bacon (the horror!) because guanciale was unavailable, and even with cheddar (double horror!) in the absence of Pecorino Romano or my preferred sweeter and milder Parmigiano Reggiano.

I’ve delved deep into the history of carbonara, reading and researching this dish over the years from books as varied as Ada Boni’s and Oretta Zanini De Vita’s to obscure Italian texts about nothing other than carbonara—and I love the story told by all four of the classic Roman pastas: gricia, made with just guanciale, maybe onion and cheese; cacio e pepe, just cheese and pepper; amatriciana, with tomato and guanciale; and carbonara, made with eggs, guanciale, and cheese.

While the first three go back to the early years of the 20th century, when Abbruzzesi immigrants flocked to Rome to take over the restaurant scene, carbonara, I’ll contend, is a post–World War II dish, if not created by GI rations and ingenious cooks, as legend has it, then definitely symbolic of a rising economy with not just one but three rich and special ingredients (cured pork, eggs, and cheese).

In the end, what bugs people (myself included) is the misnaming of the dish. No one cares, I hope, if you want to eat ramen noodles with melted Kraft Singles and a poached egg or add fresh peas to the standard dish—they care when you want to call it “carbonara,” because even with a certain amount of flexibility, it’s not carbonara anymore when you change it that much.

While the pasta I made in my college apartment with bacon, egg, and cheddar cheese was delicious, built as it was on a great combination—eggs, cheese, and cured pork—I wouldn’t call it “carbonara.” Call it “carbonara-like,” or “carbonara-inspired,” or even “cheesy pasta with eggs and bacon.” Italians, of course, care about such things, even as they change, because they are wary, watchful, and protective of their patrimony. It’s their food, after all—theirs to define however many ways they wish.

Which brings us back to that hill we’re all possibly dying on. Let’s let the Italians define their food however they want, and let’s learn that specifics matter—Champagne is only Champagne if it’s made from specific grapes in the region of Champagne, and likewise, carbonara or Bolognese should only be called that when it follows the specific rules of the region. Let’s respect those boundaries. Make whatever you want! And if it’s not carbonara or Bolognese, just call it something else. Vabbè?