Home/Recipes/The Knife Block, Beyond the Basics 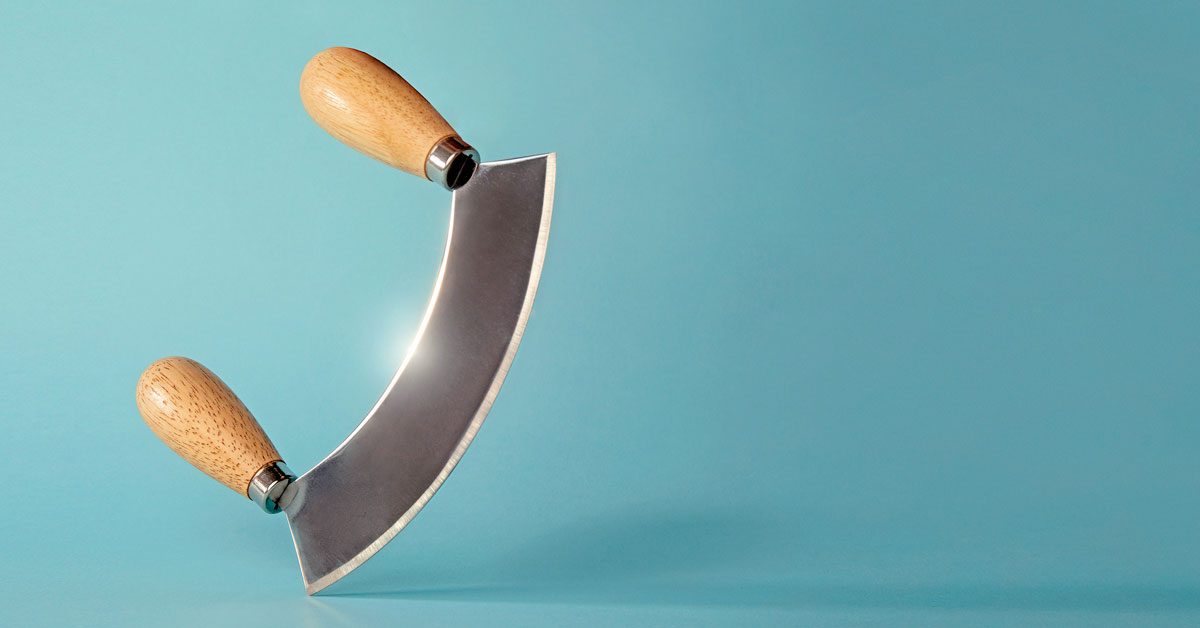 We’ve all seen the huge promises made by food magazines and kitchenware companies: “The only three knives your kitchen needs,” or, “You can cook anything with these four essential knives.” It’s an alluring offer—that, as long as you have a reliably sharp chef’s knife, paring knife, and serrated bread knife, the world is your oyster. At least . . . until you need to shuck an oyster.

But when you do want to shuck an oyster, or debone some chicken wings to stuff full of shrimp and pork, or segment a grapefruit without piercing through the fruit’s leathery skin and inadvertently losing all of its juice, it can pay to have the right tool for the job. “Historically, Japanese knives have all been task-specific until the introduction of ‘Western’-style knives in the 20th century,” explains Chubo Knives founder Jeremy Watson. “It’s been part of the knife-making DNA here to create and perfect knife shapes that do one job in the kitchen perfectly.”

Triangular-bladed honesuki knives, designed specifically for deboning, are a great example of this, especially if you’ve ever tried to spatchcock or break down a whole chicken into parts using nothing but a pair of kitchen shears. “The heavier weight and sturdy blade allow the knife to cut through poultry bones without chipping, and the triangular shape and pointed tip make it easy to cut cleanly and navigate through the different joints and parts of a chicken,” says Watson.

For Reem Kassis, author of The Arabesque Table, having a thin, curved deboning knife is crucial for buying whole chickens to stuff or break down into parts. Kassis opts for an inexpensive $12 Mercer knife that can be easily replaced when the blade gets too dull. “Since this isn’t a knife I use every single day, it also gives me a chance to try a few different kinds and see which I like best before I settle on one I want to invest in,” she says.

For Portland-based cook and writer Matt Trueherz, a long slicing knife, or sujihiki, has become an unexpected MVP of the kitchen. “I saw Thomas Keller use one interchangeably once when I was about 20,” he says. “For me, the slicer promotes a bit more of a considered cut—you can be sure to get a clean slice on something like a carrot instead of splitting it with a less agile knife, resulting in a rough surface that will cook differently.”

Trueherz is also a fan of his bird’s beak knife, a very small, very sharp paring knife with a curved blade and pointy tip that comes in handy for scraping dirt around the stem of a carrot or radish, or for hulling strawberries. The elegant little tool can cost as little as $10 and takes up next to no space, and I’ve used my own for gutting sardines and for other detailed, precise cutting jobs.

But beyond the pure utility of these ultra-specific knives, they can also make cooking (and outfitting a kitchen) a lot more fun. Sometimes a knife can become indispensable simply because it’s a souvenir from a memorable trip or because of the story it tells. My colleague Matt Rodbard raves about the $40 plastic-handled vegetable cleaver he picked up at Tokyo department store Tokyu Hands a few years ago. Writer Clarissa Wei has found lots of uses, from peeling garlic to chopping vegetables, for her cleaver made from recycled bomb steel on Kinmen island.

Last year, for Eater, Tammie Teclemariam wrote about the joys of having an elaborate breakfast ritual. For her, part of the fun is reveling in the efficacy of the curved, double-bladed grapefruit knife: “It’s hard not to appreciate the luxury of a perfectly prepared grapefruit—even if you have to do the work yourself.”

For some home cooks, the best knife is simply whichever one is most satisfying to use. As Danielle Bernabe wrote for TASTE a few years ago about a double-handled mezzaluna she inherited from a relative, “The mezzaluna simultaneously chops and mixes with an effortless downward roll—using gravity unlike traditional knives that slice straight down in one direction. The two-handed grip allows for easy pivots here and there to catch any wayward items.” Cutting through a pile of herbs with the crescent-shaped blade is as much about the rhythm and feel of the motion as it is about the outcome. Dan Bransfield, the author of Pizzapedia, favors a similar rocker knife, as he says, “not just for pizzas, but occasionally chopping meat in swift, guillotine fashion. Very satisfying!”

Essential Knives, Beyond the Basics: