I think by now you know how much I love make-ahead breakfasts. I’m not a morning person (understatement of the century) so it’s nice to just reheat a delicious, hearty breakfast when I’m half asleep.  I’ve had Amy’s recipe for Sausage and Hashbrown Breakfast Quiche printed for awhile now but there hadn’t been a good time to make it. 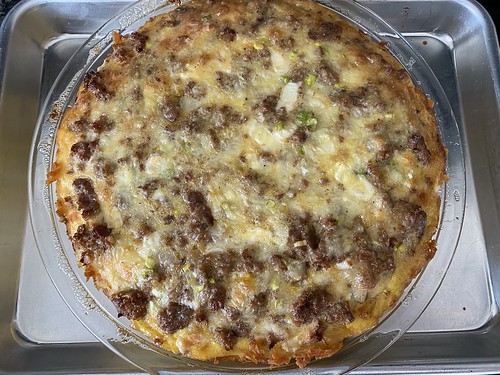 I finally got my act together recently and got it made. The biggest question was whether it would reheat well so I could make it in advance. I made this one the same day we ate it and my family almost died of starvation (sarcasm) waiting for it to bake. When we reheated the leftovers the next day it was even better than the first day, so I’m definitely making it ahead of time next time. 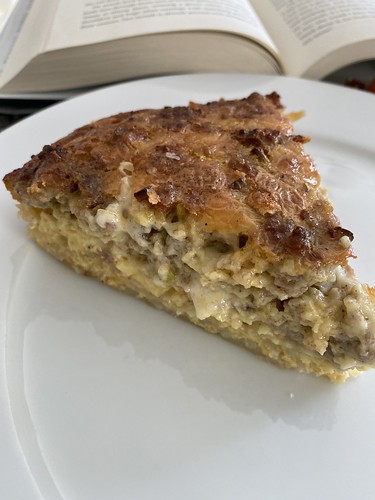 My quiche took a lot longer to cook than the original recipe stated and I’m trying to remember if I used a full pound of sausage vs. the half pound called for. I probably did, knowing how my mind works. Just be aware of that and keep an eye on it. I ended up covering mine at the end because it was getting super brown on top.

In a large bowl gently toss the hash browns with the butter to coat. Season with salt and pepper. Press the hash browns into the bottom and up the sides of the plate to form a crust. Bake for approximately 25-30 minutes or until golden brown.

In the meantime, sauté the ground sausage in a skillet over medium-high heat, breaking it up with a wooden spoon, until no pink remains, about 5 minutes. Set aside to cool.

In the large bowl you used for the hash browns, whisk together the eggs, cream, cheeses, and scallions. Season with a dash of salt and pepper. Add in the cooked sausage crumbles. Mix to combine.

Pour mixture on top of the hash brown crust. Bake for approximately 30 minutes or until set. Let cool slightly, cut into wedges and serve.