I told you guys a few weeks ago I was having a corn moment… and I meant it! Today it’s all about this Roasted Pepper and Corn Salad!

I know we’re in this weird in-between moment in our social calendars. Some people have kids who are going back to school soon, some people are taking off for their end of summer vacations / house rentals, and some people are just trying to live their best lives and stretch out summer for as long as possible. So whichever camp you fall into, this Roasted Pepper and Corn Salad works. It’s a great weeknight meal if you want to add some protein on top to feed a family. It’s an incredible salad if you want it as a side dish at your next backyard bash. And if you’re coming home from vacation in the near future… it’s basically detox city!! I’ve thought of everything – you’re welcome.

But bottom line is, I’m still not cooking inside. I’ve developed a serious addition to my grill and there’s no chance of letting up anytime soon. I even made Thomas go buy 3 extra propane tanks in case we ever run out – could you even imagine. The tragedy. So fire up that grill and throw some bell peppers, corn and tomatoes on for a very yellow salad. Add some cilantro vinaigrette on top and that’s all she wrote!

Like I said earlier – this would be great with chicken, beef or salmon on the side or on top!! 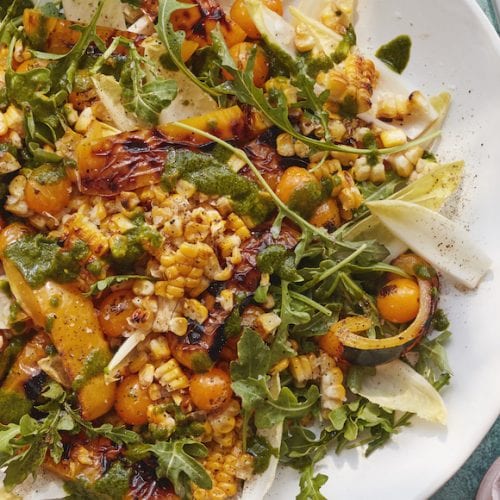 When corn is coming out of your ears during the summer months, this Roasted Pepper and Corn Salad is exactly what you need to make!
5 from 1 vote
Prep Time 5 mins
Cook Time 15 mins
Total Time 20 mins
Course Side Dish, Salad
Cuisine Mediterranean, Southwestern
Servings 4 people