A delicious recipe for Pozole Verde- a flavorful Mexican stew made with tomatillos, green chilies, chicken and hominy, topped with cilantro, avocado and red onions.  Updated 9/21 See recipe notes for a vegan version. 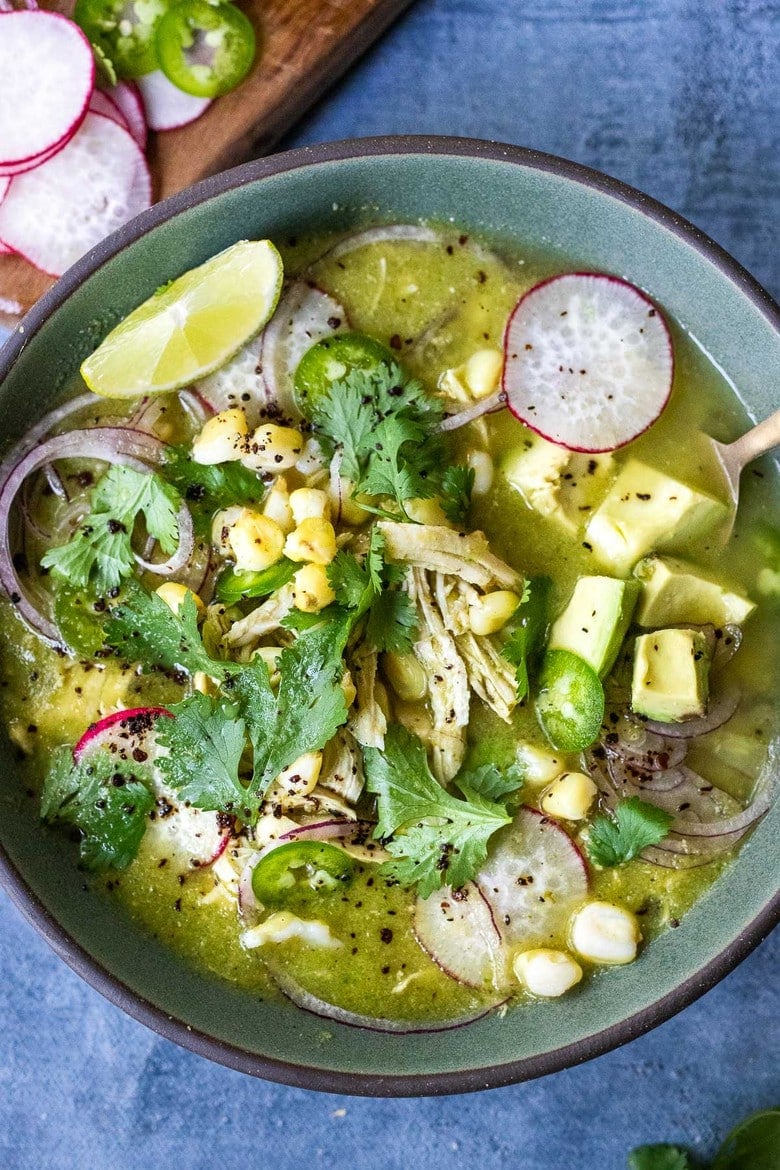 Pozole Verde is the perfect summer-to-fall transitional soup, because of its use of seasonal, late-summer produce like tomatillos and green chilies.  The soup’s base is made with poblano chilies, tomatillos, chicken and hominy.

It’s topped with a wide assortment of fresh ingredients- cilantro, red onion, radish, avocado, pepitas, diced tomatoes, or shredded cabbage. You can add or subtract any of these herbs and vegetables, among others, to make it as simple or as elaborate as you like.

Pozole Verde is a flavorful, healthy and satisfying meal that is surprisingly easy to make. It also can be made ahead and reheats beautifully.  My good friend Jill first introduced this soup to me and I’ve been a fan ever since.

Pozole is a traditional Mexican Stew, made with hominy (corn) and meat, most often pork, in a flavorful rich broth. There are many versions, but the broth is most commonly red (rojo) or green (verde) depending upon regional ingredients and influences.

Pozole Verde is common in Guerrero, using mostly green ingredients like tomatillos, green chilies, and cilantro.  One of Pozole’s main components, no matter what the color, is hominy.

Pozole is considered a celebratory dish in Mexico, often made for parties and large groups because it can be prepared easily and in large amounts. It makes for a great feast! 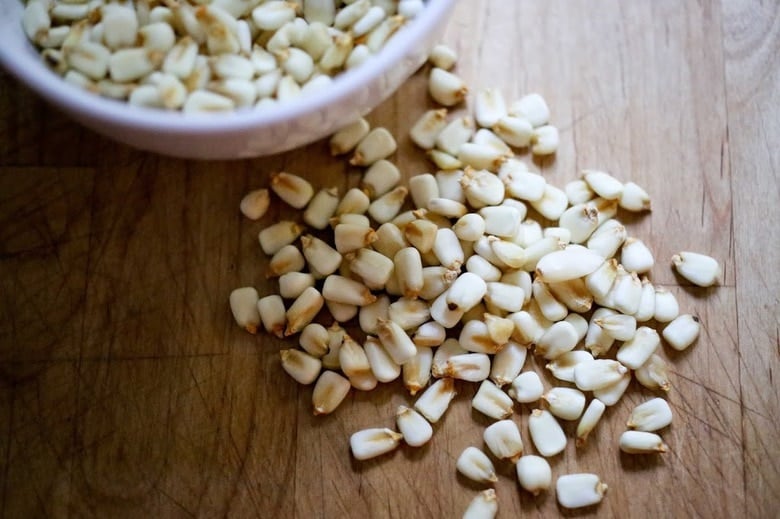 Hominy is basically corn kernels that have been processed so they lose their outer layer, and the corn kernels puff up when they are boiled. Corn was a sacred plant to Aztecs and the other indigenous people of Mesoamerica and found its way through history into this stew.

If you can find dry hominy, I recommend using it. Canned will work here too- but cooking it from scratch will result in hominy that is more toothsome.

How to make Pozole Verde 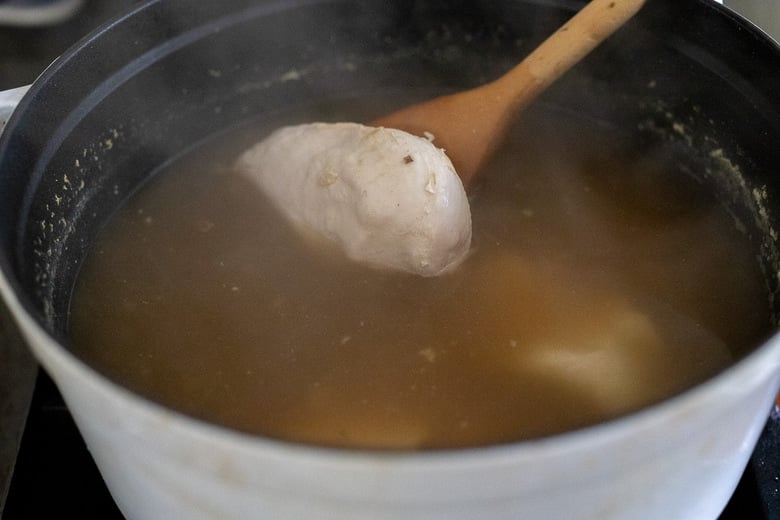 Blend tomatillos, poblano chilis, jalapeno, tomatillos, onion and garlic with a cup of water, into a smooth sauce to create a flavorful bright green base. 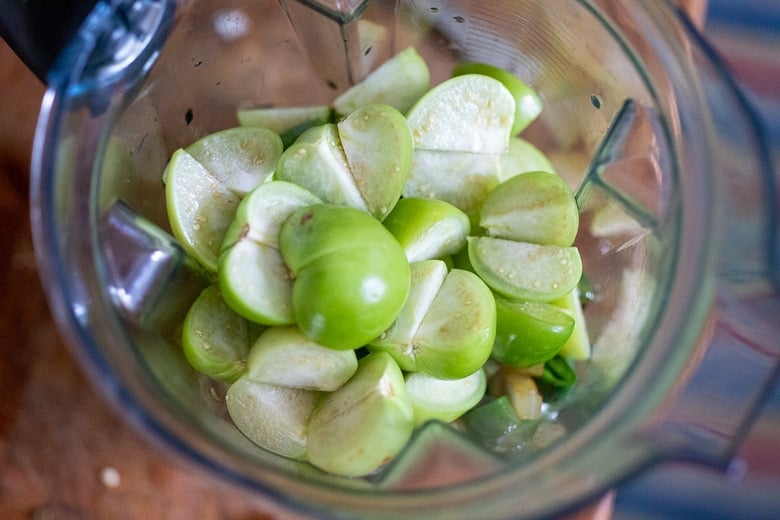 Pour the blended Verde sauce, into an oiled pan, and cook over medium-low heat, stirring for about 10-15 minutes. 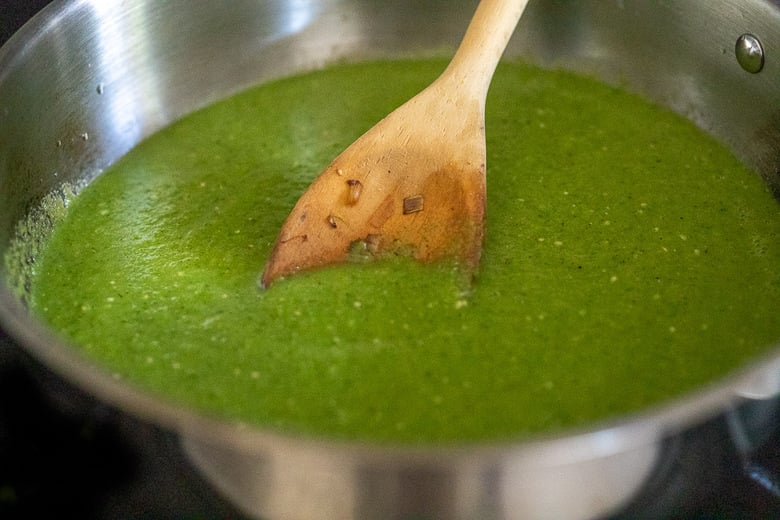 By this time the chicken should be cook through- time to shred! 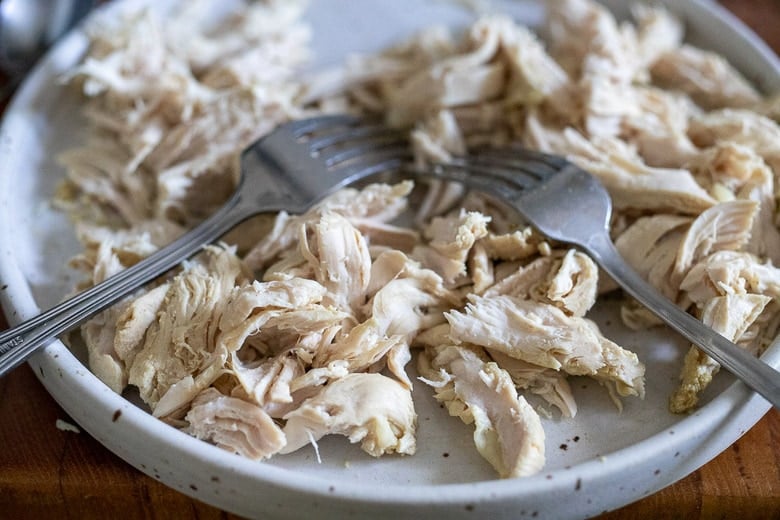 Place the shredded chicken back into the broth. 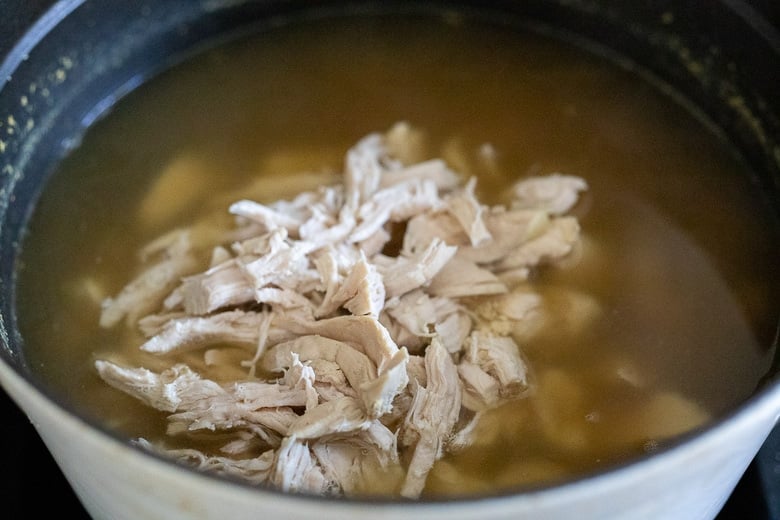 Pour the cooked Verde sauce into the pot with the chicken and broth and give a stir. 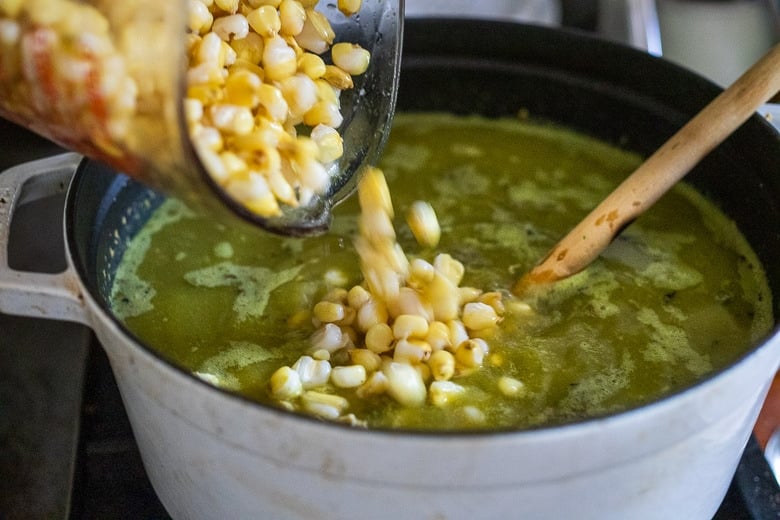 Thicken the broth with a cup of the hominy, by blending it up with a little of the soup base.

Wait to blend in the cilantro until right before serving to boost the color here. Ladle a little broth into the blender with the cilantro. 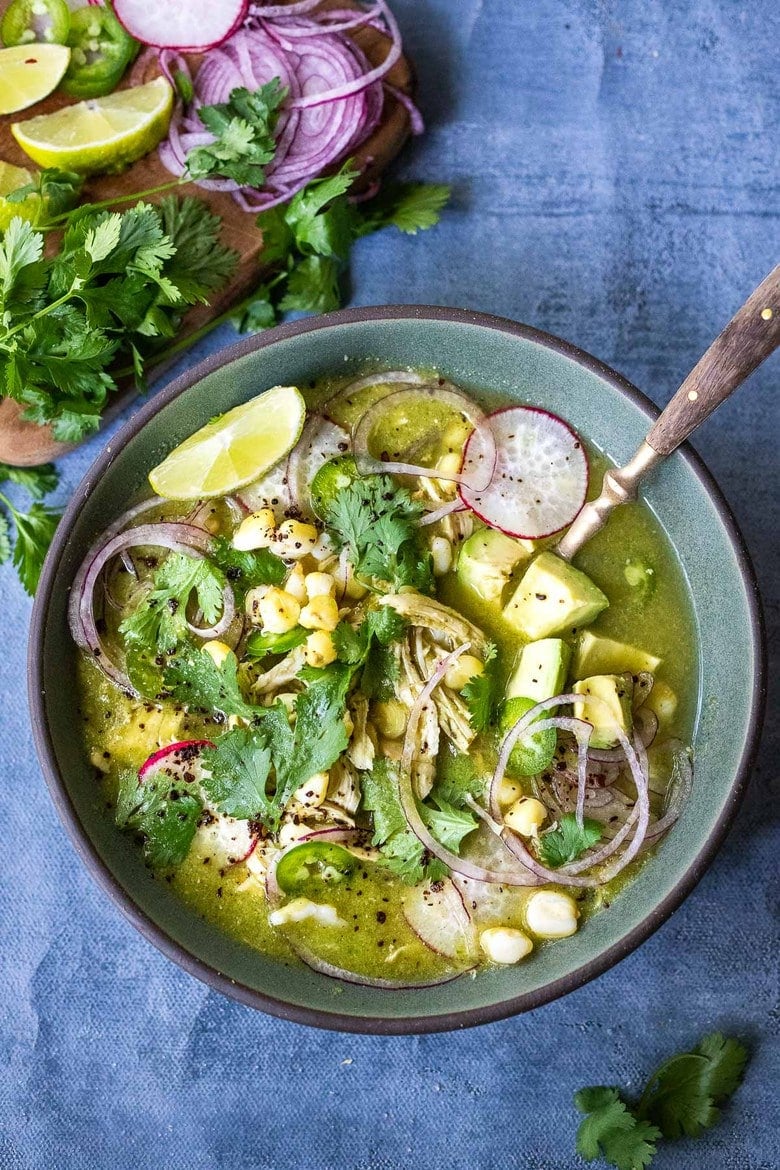 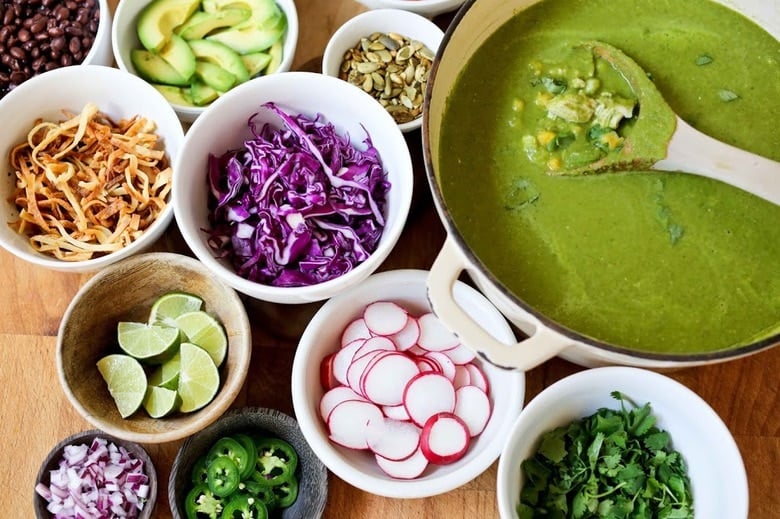 Make crispy tortilla strips as one of the toppings for added texture. Just cut corn tortillas into thin strips, spray with spray oil and bake in a 300 F oven till crisp. 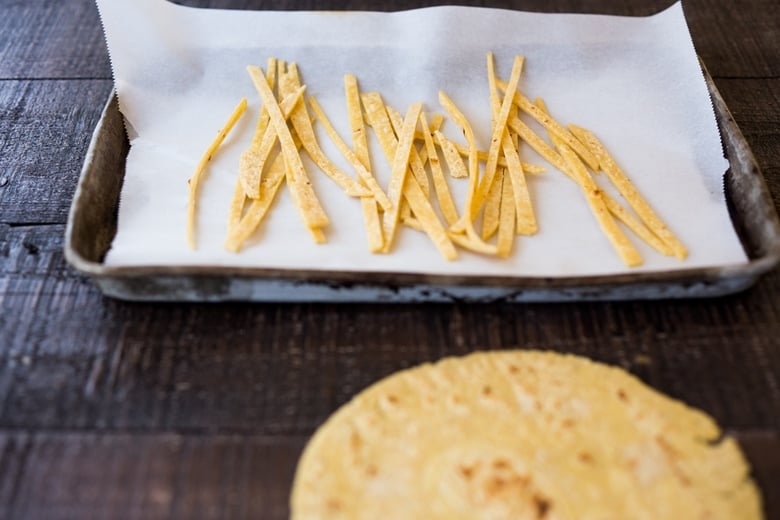 A fun way to serve this is to create an interactive dining experience for your guests, where they help prepare all of the all toppings for the Pozole Verde,  themselves.

As each guest arrives, hand them a beer or margarita, and give them a prepping station in the kitchen. Have cutting boards, bowls and knives ready to go.

Set up an area for them to mingle while they prep. A. kitchen island is great for this!  Have one person slice onions, another slice cabbage, and have someone else chop cilantro. Getting everyone involved in the kitchen is a great way to break the ice, especially if guests are meeting for the very first time.

I have found that people actually prefer having something to do with their hands in social situations and giving them a project tends to stave off some of the social anxieties we all experience from time to time. 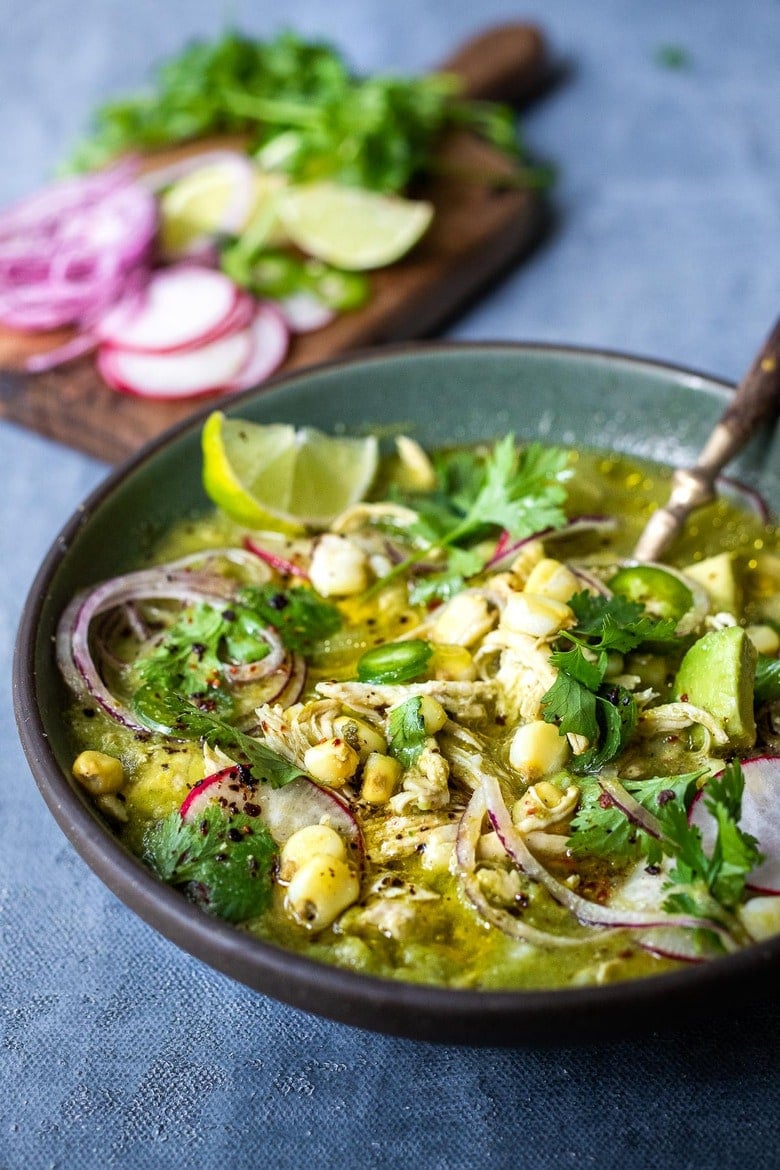 Hope you enjoy Pozole Verde, and be sure to read the instructions all the way through before starting so you understand the way to keep the soup vibrant green!

A flavorful Mexican Stew called Pozole Verde! This version is lightened up with chicken (instead of pork) and is the loveliest vibrant green! Loaded up with veggies, this makes for a healthy, delicious dinner with lots of texture and flavor. Perfect for entertaining!

Cook the chicken: In a large heavy-bottomed pot or dutch oven, bring the chicken stock, salt, coriander, cumin, oregano, epazote, cumin and pepper to a boil. Add the chicken breasts, cover and simmer gently over low heat until they’re tender and cooked through, about 25 minutes. Transfer the chicken breasts to a plate and shred the meat, skim the stock, and return the chicken back to the stock.

Make the Verde Sauce: In a blender, add one cup of water. Add tomatillos, onion, garlic, poblanos and jalapeno garlic. Blend until smooth, scraping down sides if necessary.

In a skillet,  heat the oil and add tomatillo puree and cook over moderate heat, stirring occasionally, until the sauce turns a deep green, about  10 minutes.  To the blender ( it’s ok if its not rinsed) ladle in 1 cup of broth from the chicken soup pot, set aside.

Pour the cooked Verde sauce into the chicken soup pot. Add the 3 cups of the hominy (reserving 1 cup) and bring to a gentle simmer over moderate heat.

Add the cilantro and their tender stems  into the blender with the chicken stock, cover tightly with a kitchen towel and blend until smooth. Add the reserved 1 cup of hominy. Blend again until smooth. If you need more liquid to get the blender going, just ladle from the pot.  Add this to the soup.

Taste the soup.  Season with salt, pepper and cook on warm just until heated through -do not boil, or you will lose the lovely color. If soup lacks depth, add more salt and or a couple of chicken bouillon cubes ( or a couple teaspoons of chicken broth paste). The goal here is to get enough depth in the soup to balance out the tartness from the tomatillos and heat from the chilies.

Serve the Posole in bowls, along with sour cream and any or all of the sides, letting people add whatever toppings they want.

To make this VEGAN: Sub flavorful veggie broth for the chicken broth. Sub 3 cans black beans or pinto beans for the chicken. You could add other veggies here- sauteed bell pepper or zucchini. The challenge will be getting the broth flavorful enough to hold up to the heat. If your soup lacks depth, add a couple of extra boullion cubes or teaspoons of this veggie broth boullion paste. It will help a lot!