“It’s the perfect bite,” Seung Hee Lee, the coauthor of Everyday Korean, says about kimbap, and I’m kind of annoyed I didn’t think of that before. As a second-generation Korean American, I ate plenty of kimbap growing up and have recently been making it obsessively—and thinking about what exactly makes it good (and not so good). I just hadn’t been able to sum it up so pithily.

Kimbap, indeed a wonderfully balanced bite, literally translates from Korean to English as “seaweed rice,” though it’s more accurately described as a rice roll—a piece of kim (seaweed) covered with well-seasoned bap (rice) and rolled around fillings. It’s irritatingly too often called “Korean sushi” because of its visual similarity to futomaki, Japanese sushi rolls. Sushi, however, it decidedly is not.

The comparison is particularly fraught because kimbap is one of the quintessentially nostalgic foods in Korean cuisine, associated by those in Korea and in the diaspora with childhood—with field trips, picnics, and long car rides. To this day, parents take squares of toasted, nutrient-rich kim and wrap it around bap and banchan (side dishes) to stuff into the mouths of picky children. Mothers rise early to roll, cut, and pack kimbap to eat as mess-free meals on the road or show off at social gatherings.

Eunjo Park, executive chef at Momofuku Ssäm Bar, thinks the difference between kimbap and futomaki comes down to three things. First, simply, “kimbap is Korean, sushi is Japanese”—they’re different culturally. Second, “kimbap rice is seasoned with sesame oil and is more savory, where sushi rice is vinegar-based. Third—and most important—is the filling.” Futomaki tends to be filled with raw seafood and feels almost like a palate cleanser, while kimbap is more balanced and has more heft. 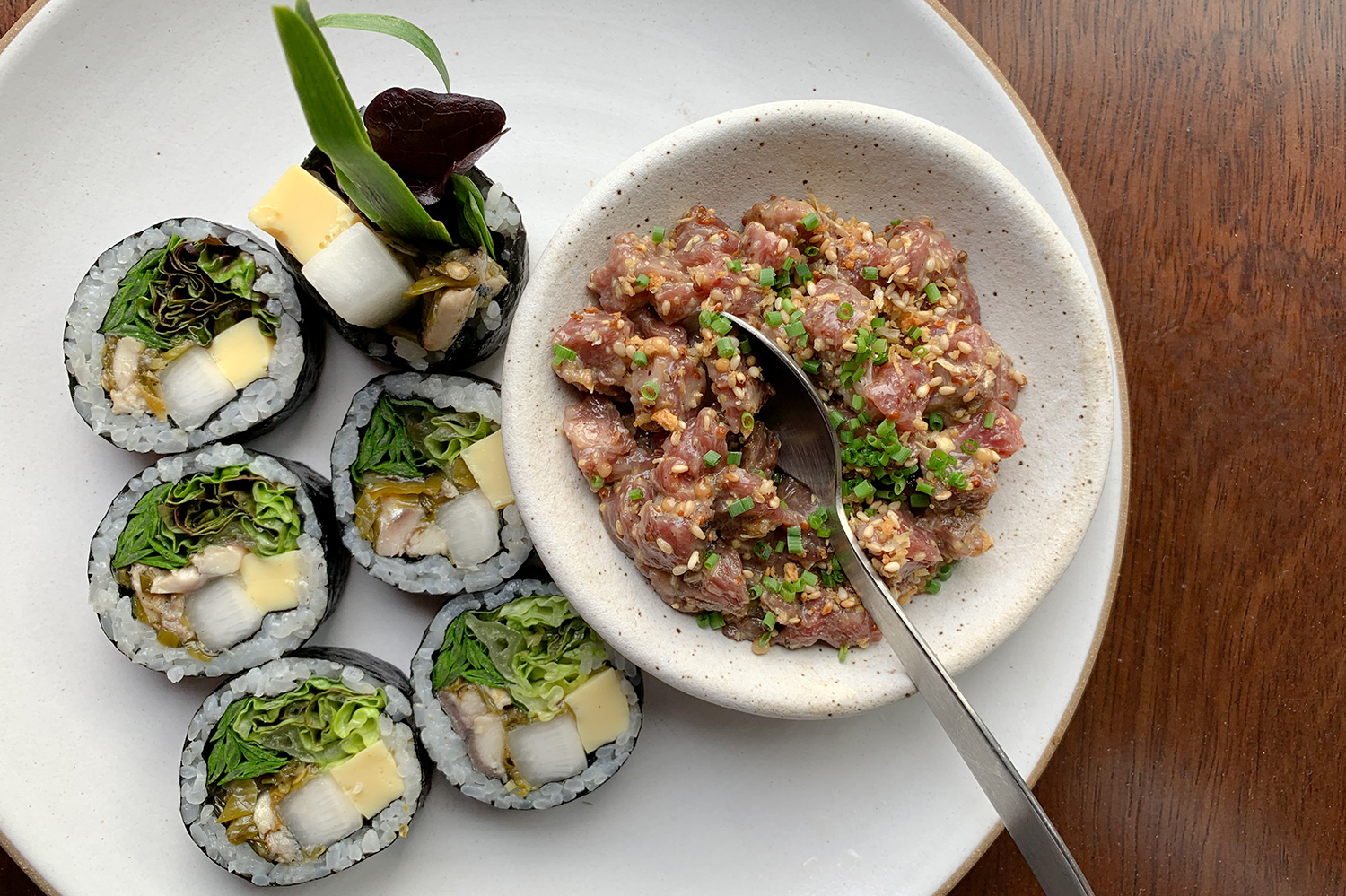 I describe kimbap as a labor of love. The rice must be made well (not too sticky, not too dry) and seasoned with salt, sesame seeds, and sesame oil, just enough to provide flavor (too much sesame oil, and the rice will be too slick for the kim and taste greasy). Each filling—traditionally a sautéed protein (like marinated beef bulgogi or eomook, pressed fish cake), omelette, danmuji (pickled radish), and crisp vegetables like carrots, blanched spinach, and cucumbers—has to be made individually. Then each kimbap needs to be arranged, ideally with a thin layer of rice, and rolled, often using a bamboo mat to assist, then sliced—all to make that perfect bite.

The origins of kimbap are murky, the discourse influenced by the lingering effects of Japan’s occupation of Korea, formally from 1910 to 1945. Sources, including the Encyclopedia of Korean Culture, cite two versions—the first, that Koreans have been wrapping rice in kim to create a ssam (wrap), called a kimssam, since the production of kim began in the Jeolla Province during the Joseon era (1392–1897). Kimbap, then, is the natural evolution.

Others argue the dish’s lineage is derived from futomaki brought over to Korea during the Japanese occupation. “Kimbap,” as a word, didn’t enter the Korean vernacular until 1935, when the word was printed in the Dong-a Ilbo, a daily newspaper established in 1920. Further, according to the Federation of Korean Cultural Center, kimbap was made in the Japanese style, with rice seasoned with vinegar and sugar, until the 1970s—when a transition to the more savory rolls occurred.

Today, kimbap has come to represent Koreanness. “Is hamburger really American food?” Lee asks. “If you go back to the origin, it’s from Germany or something, but ask any American—they think hamburger is their food. To me, kimbap is like that. It doesn’t matter where it really came from. We all grew up eating it, [and] we have our own tricks and tips and preferences on how it’s done.”

Kimbap, naturally, has been evolving as the diaspora grows and changes. Over the past decade, we’ve been seeing more versions pop up around the United States, from traditional fare (like at Seoul Kimbap in Honolulu and Ajumma’s Kimbob Deli in Dallas, both of which serve kimbap with tuna mayo, eomook, and bulgogi) to more contemporary takes, like Park’s at New York’s Ssäm Bar, that push the boundaries of kimbap—and in so doing challenge notions of tradition and Koreanness.

“It’s so hard, especially as a Korean chef cooking Korean food, to be within tradition but go above and beyond without breaking that tradition,” Park admits. While she plays wildly with the internal components of kimbap, she sticks to the familiar structure—bap wrapped in kim—approaching it as a canvas on which to make her own spins that represent who she is as a chef. In the past, she’s used unconventional proteins like foie gras and raw bluefin tuna. At Ssäm Bar today, she accompanies vegetable kimbaps with a raw side as a topping—for example, a kimbap with pickled onions, shiso, and cucumber, served with spicy raw scallops. As she says, she makes kimbap, but why shouldn’t she use raw seafood? 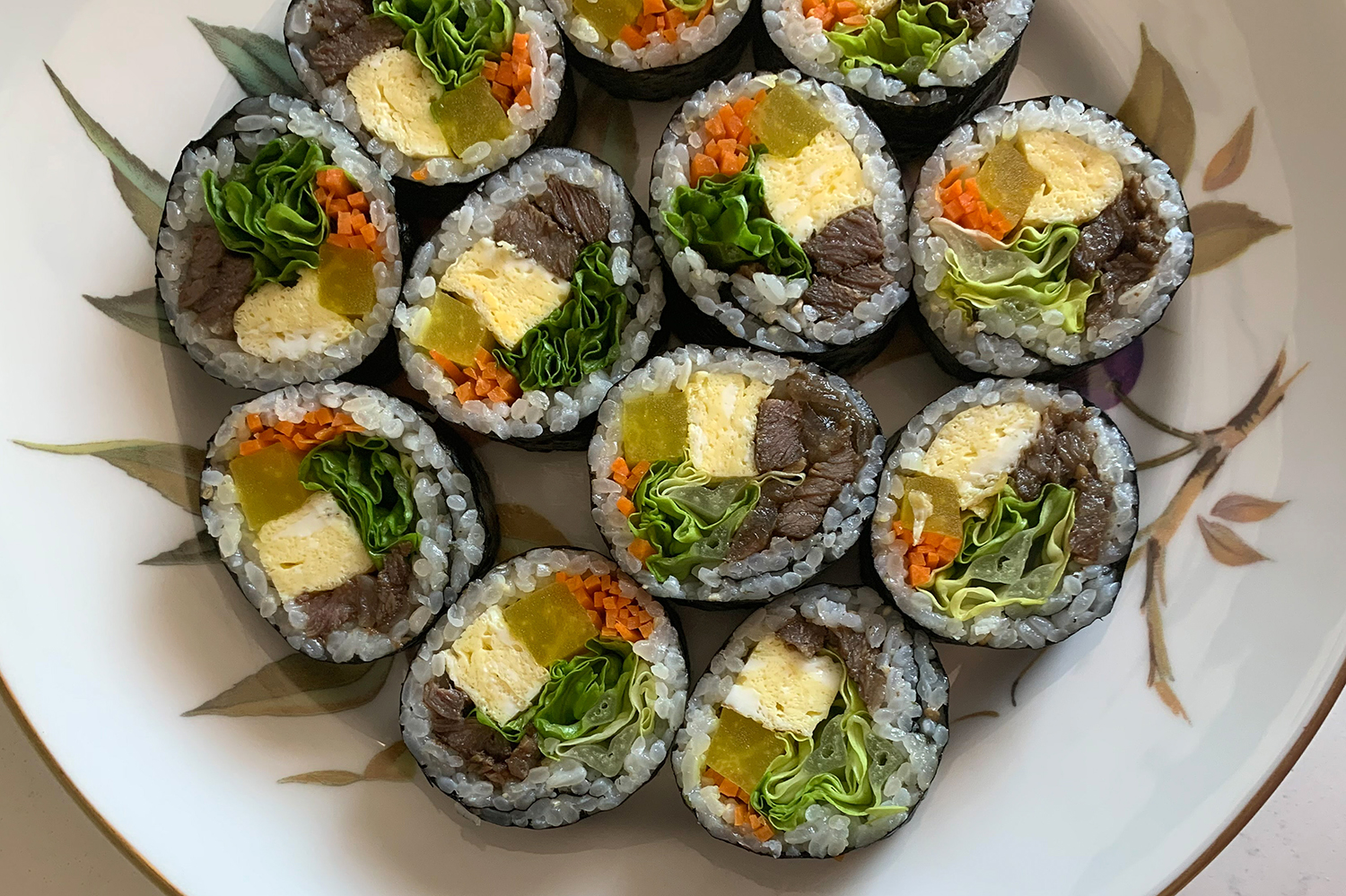 Then there’s Kimbap Lab in Williamsburg, where cofounder Sarah Lee and her partner, chef Won-il Lee, introduced a new way of eating kimbap in 2016—by dipping kimbap in novelty sauces, like a mayo made with ssamjang (a gochujang- and doenjang-based sauce with other ingredients, like garlic, honey, sesame oil, and toasted walnuts, mixed in) or a vegan seaweed sauce. The sauces bring another layer of flavor and texture to their kimbaps that lean more traditional with fillings like spicy pork, yubu (fried bean curd), or gochujang chicken.

“We were the first ones to do the pairings with kimbap,” Sarah Lee says, speaking to me from Seoul, where she’s currently staying. She tells me Korea’s kimbap scene has also been changing in recent years, with more health-conscious and vegan options. Excited by the fresh rolls that feel both familiar and new, Koreans who travel to New York City and visit Kimbap Lab have repeatedly asked that they bring Kimbap Lab to Seoul.

None of this is to discount traditional kimbap. At Lucky Rice Cake in Los Angeles, Eunice Park makes traditional kimbap with bulgogi, Korean fish sausage, and imitation crab, focusing on high-quality ingredients and leaning into the comforting qualities of kimbap.

This variety showcases the creativity to which kimbap naturally lends itself. Seung Hee Lee says, “You can customize your kimbap as you would customize your burger, as long as you have your fundamentals down solid,” and I can’t help but think about Koreanness in the diaspora. The evolution of kimbap feels natural, a food through which Korean Americans can embrace and express their identities, and, as someone who makes a whole lot of kimbap herself, I agree. All you need are kim and bap—the rest is up to you.