Home/Recipes/Aunt Jemima, Mammy, and Me 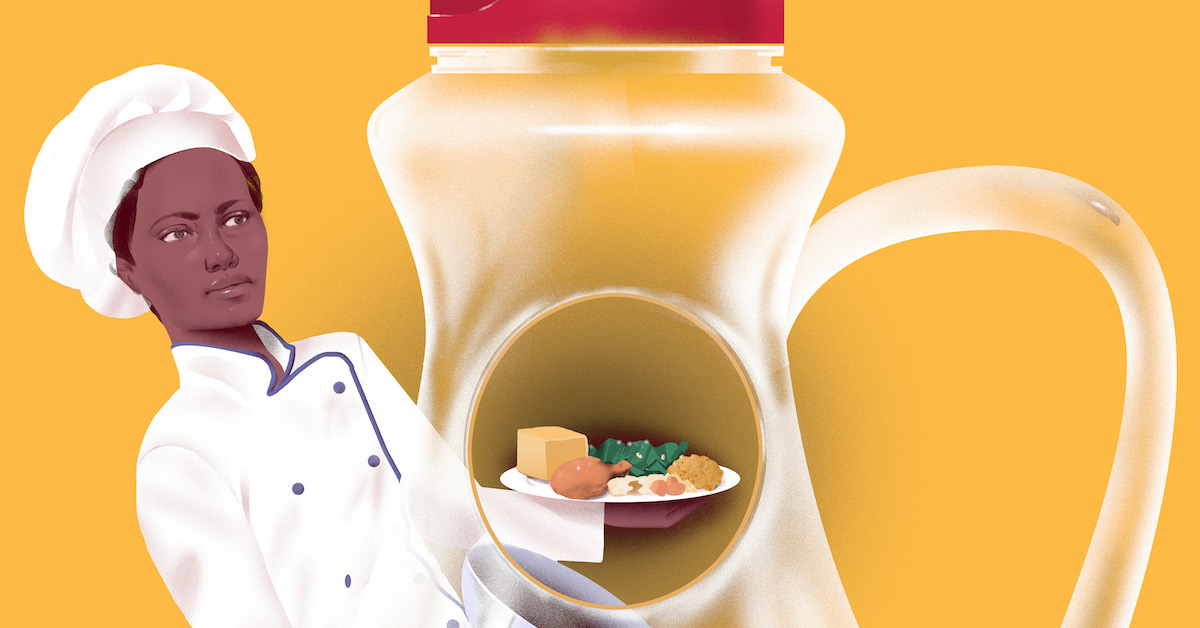 I’m a born-and-bred Minnesota girl with lake fish and snowbanks running through my veins. I’m biracial, and I was raised by my mom and her family, a wonderful clan of white, working-class East Siders who loved me to the bone. As a ’70s and ’80s kid, I never wanted for much in the way of racial identity until I arrived at college and got a powerful shot of Blackness in the form of Public Enemy and Malcolm X. But for the most part, my upbringing felt like a melting pot, with a few scary pinches of the N-word tossed in when I had my guard down.

Summers meant my grandfather’s fish fries—a butcher by trade and an avid fisherman, he fed the family countless fillets of Crappie and sunfish that he caught, processed, and cooked with his own hands, summer after glorious summer. Sweet corn season is practically a religion here—I learned to identify a ripe ear by the stalk alone almost before I could walk. My Norwegian Nana made oyster stew on holidays. My grandma was a master at pot roast.

But then I entered a career in the restaurant industry, where identity is everything, and I started to wonder: What were Black people eating and cooking in Minnesota?

Cooking is hollow without identity, and there’s a reason why food cooked with ingredients that are out of season, but even more so out of place, can taste so meaningless. Cooking, if it is anything, is a road map. It allows others to experience where you and your people have been. And if you are particularly good at it, you can push the boundaries to imagine where you have the potential to go. If you happen to have grown up in a big Italian household, or one where the Jewish High Holidays don’t stand a chance of falling by the wayside, or where your grandmother’s Persian rice technique is practically dowry, as a chef, you come preloaded with that map. You know where to begin, and even if the journey is tenuous, you have guardrails on which to lean. As a chef, genetic code is everything.

All I knew was that I was from Minnesota, so I tried to embrace that as an identity: fish fries, pot roast, refrigerator pickles, a clever hack for sweet corn that brings the Caribbean to the table along with my beloved Minnesota. But it wasn’t enough to hang a culinary identity on. If identity was everything, given the inherent duality of being biracial, my cooking needed to bring in both aspects of my DNA, not just the ones that make me the proud great granddaughter of Myrtle Lilleskov, who was 100 percent Norwegian.

As a chef, genetic code is everything.

Eventually, late into my cooking and food writing career, a book called The Jemima Code: Two Centuries of African American Cookbooks fell into my hands, the most serendipitous birthday gift I’ve ever received. The cover of The Jemima Code, by Toni Tipton-Martin, is emblazoned with a familiar image: a matronly, kind-eyed, kerchiefed and aproned black woman, at your service.

I don’t have strong ties to my ancestral South, and the reasons for this are many, including the bureaucracy of adoption, family secrets, and the particular experience of being a biracial northerner—all stories for other days. But even if I did have a strong connection to the South, reaching for my identity as a Black woman chef would likely be a discouraging one.

As illustrated in The Jemima Code, from the birth of this nation until the end of the twentieth century (about a 200-year period), only 200 of the 100,000 cookbooks published in America were credited to Black cooks. The figure is staggering when you think about the fact that, according to the book, “throughout 350 years of slavery, segregation, and legally enforced white supremacy, the vast majority of women of African ancestry in the South lived lives tightly circumscribed [to] . . . domestic kitchens.”

In other words, what we think of today as Southern cuisine, or America’s most vaunted cookery, ought to be credited, at least by half (and more, if you’re asking me), to the Black woman cook.

Meanwhile, the vast majority of Black women’s contributions to American cuisine have been erased from culinary history. African cookery is most commonly an oral tradition in the first place, but naturally, enslaved people would not have been able to write down their own recipes had they wanted to, as reading and writing for persons who were enslaved was a crime punishable by death.

What we think of today as Southern cuisine, or America’s most vaunted cookery, ought to be credited, at least by half (and more, if you’re asking me), to the Black woman cook.

As Black women predictably and undeniably became the experts of the American kitchen, enslavement be damned, enslavers needed an answer for the obvious humanity and dignity exhibited by this expertise. The answer to these burdensome questions was the Black mammy, or Aunt Jemima—a fictional stereotype that quickly proliferated in minstrel shows, which were by far the most popular form of public American entertainment from the 1840s through the 1870s.

“She had to be humorous, stout, lighthearted, illiterately magical,” writes John Egerton in the foreword of The Jemima Code.

The reason I had such a frustrating difficulty finding my own culinary identity was encoded in the figure of mammy. I had been searching for a history that had been erased and replaced with a caricature.

As recently as the late 1980s, when I was coming of age, Southern cuisine cookbooks were still imbued with the ghost of the Aunt Jemima–esque Black mammy. This was the era of “lightening” Southern cuisine and dismissing soul food as the unhealthy, undesirable part of Southern cooking, a phenomenon that served to further erase the Black hands that made an irrefutable and crucial contribution to its conception.

Without strong ties to the South, or even the large Black communities of Chicago or Detroit that were several hours’ drive away, the cookbooks that fell into my hands in the pre-internet 1980s were rarely penned by Black chefs proudly reclaiming their exquisite Southern cooking informed by Africa and the Caribbean. Instead, the chefs who were getting publishing deals by claiming Southern cuisine were Paul Prudhomme (whom I have on my shelf); the Cajun television personality Justin Wilson, with his catchphrase “I guaran-tee!”; and, later, the juggernaut empire that was Emeril Lagasse. All those men are white. I hadn’t so much as heard of Leah Chase or Edna Lewis.

Meanwhile, the narrative of soul food, itself a moniker that came out of the civil rights movement as a way for Black people reclaim their cooking, was dismissed as something unsavory and objectionable, not to mention a cuisine that could possibly kill you. The 1980s were the era of “Nouveau Cuisine,” with twee vegetable preparations, artsy plate presentations, and an extreme emphasis on health. Soul food was the perfect antithesis for a counternarrative: low, slow, fat-laden, and fried, filled with fatback and offal—it was precisely what you shouldn’t be eating. Never mind that African heritage and Caribbean diets, inextricably part of soul food cooking and Southern cuisine (which are the same thing or completely different, depending on who you ask), include some of the healthiest ingredients in the world.

As Baldwin clearly knows, Aunt Jemima’s harm does not dissipate with her removal from the syrup bottle.

When I was cutting my teeth in the Twin Cities restaurant world in the early 2000s, there were a handful of big-name, white male chefs running important restaurants featuring their inventive takes on French classic cookery. Meanwhile, I cast about trying to make connections between sweet corn and grits or find a through line from the bream that some enslaved communities were able to subsist on thanks to ingenious fishing, hunting, and foraging (when not under the vicious eye of enslavers) to my grandpa’s fish fries. Even now, 20 years into my career, I have yet to develop a coherent Black Minnesota cookery that resonates with me. It is a lifelong project.

While Aunt Jemima has received a number of “makeovers” throughout her astounding 132-year run as one of America’s most recognizable brands, the kerchiefed Black mammy survived until 1968 and is the most recognizable and iconic of her “looks.” And the pernicious effect of the grotesque Black mammy stereotype does not vanish when the kerchief becomes a headband or even a perm. In its multigenerational presence, the Quaker Oats Company, now owned by PepsiCo, has ensured that Aunt Jemima is encoded in the DNA of our nation.

I once had the pleasure of seeing Brittany Howard, one of the greatest soul singers of our times, leading Alabama Shakes in concert. When she took to the stage and belted out her first thunderous notes, a voice from behind me said, “She’s a real Aunt Jemima.”

After the murder of George Floyd in my hometown and the subsequent uprising and period of racial reckoning we are experiencing in 2021, PepsiCo announced that it would retire and rebrand its infamous syrup and pancake mixes. But enter any American supermarket today and the stereotype is still there, for anyone to see. Sure, Aunt Jemima has her 1989 refresh, with pearl earrings and a perm (never mind that the perm is passé for the Black woman in 2021—we now embrace our natural hair), but the name, and the specter of her evil invention, remains. The name, by the way, is culled from an 1875 minstrel song, “Old Aunt Jemima,” a fact that the company admits on its own website.

In the 1998 scholarly book Slave in a Box: The Strange Career of Aunt Jemima, M. M. Manring explores how the Aunt Jemima brand continues to “conjure disturbing social hierarchies” in present-day America. “Aunt Jemima lives on because white Americans like having a mammy. Quaker Oats can move her off the plantation, take off her bandanna, and tint her hair; it makes little difference. . . . Keeping her around, spinning superficial explanations for her continued presence on that box, doesn’t help us overcome that legacy.”

But in the foreword of that book, a quote by James Baldwin asks: “Before, however, our joy at the demise of Aunt Jemima and Uncle Tom approaches the indecent, we had better ask whence they sprang, how they lived? Into what limbo have they vanished?”

In other words, who made them, who were they really, and what happens to them (and us) in the imagined aftermath of their extinction? As Baldwin clearly knows, Aunt Jemima’s harm does not dissipate with her removal from the syrup bottle.

One of the obvious yet rarely spoken consequences of Aunt Jemima and the Black mammy archetype—America’s most infamous Black woman cook—is that if we agree that the Black woman cook is not the obsequious, servile figure born to cater to white folks’ leisure, then who is she? Because, in order for Aunt Jemima to exist, the intelligence, expertise, and excellence of the actual Black woman in the kitchen does not. Aunt Jemima was masterminded precisely to deny the reality of Black female greatness emerging from the plantation kitchen. And just as that undeniable force was portending, white supremacy stepped in to stamp it out.

I have finally begun to locate my true identity and place woven into the hidden stories and lies told about the real Black American woman chef. It is a plodding and unsteady journey, and I often feel like a toddler getting her footing. Time was wasted. I am late into my career. I have entered middle age, and my back and joints will only withstand a few more years of work in the serious professional kitchen. I kissed my long-standing dream of having my own restaurant goodbye a long time ago. Still, this new place feels a little like finding a home, and, thanks to my own daily research, I am getting there, hour by hour.